The Legend of Zelda: Breath of the Wild demo at E3

During their E3 conference today, Nintendo Treehouse showed an extended gameplay demo of The Legend of Zelda: Breath of the Wild.

The live demo began with Link awakening, having been submerged in some manner of technological stasis chamber. This area, set with glowing constellations on the wall, was referred to as the Shrine of Resurrection.

Eiji Aonuma, Breath of the Wild‘s producer, said that they’ve added technology as a new twist to the Zelda universe. This fresh focus was immediately highlighted by Link’s retrieval of the Sheikah Slate, a device akin to a Hylian smartphone. The Slate served as a key to the Shrine as well as Link’s digital map. Later in the demo, it was demonstrated as a sort of digital camera scope, which allowed Link to zoom in and tag enemies and environment.

Similar to the masks in Majora’s Mask, Link can gain new abilities by unlocking runes. One rune, Magnesis, was shown to allow Link to manipulate metal objects, lifting them up free of gravity to use as cover during combat or to solve puzzles.

Legend of Zelda creator Shigeru Miyamoto said that the game harkens back to the spirit of the original Zelda, “the spirit of freedom.”

The inventory and stamina systems in Breath of the Wild were also introduced, as Link left the Shrine for the Great Plateau. Aonuma called this area “the birthplace of the kingdom of Hyrule.” Along with traditional Zelda dungeons, over 100 puzzle shrines are dispersed around Breath of the Wild‘s world for Link to solve and gain new abilities. 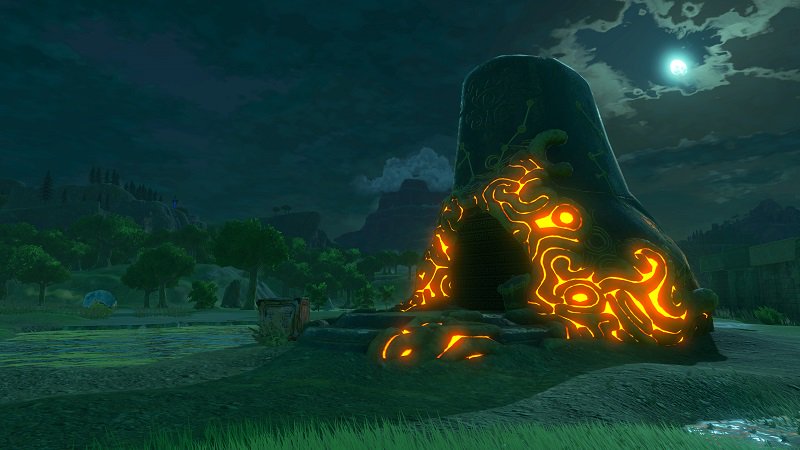 Shrines in the new Legend of Zelda game //Breath of the Wild, Nintendo EPD

Roaming around, Link collected clothes, apples, and a woodcutting axe. Aonuma later stated that the environment, unlike previous Zelda games, would not have hearts in it. Instead Link will have to harvest, hunt, cook, and consume food and elixirs to regain health.

Equipment items like armour, clothing, and weaponry will now have durability and can break, adding a focus to defeating enemies and then looting their equipment. Confirmed weapons include ranged weapons like longbows, and melee weapons such as spears and swords.

There are other features of equipment, as well; sticks can catch fire, and the player had to equip a quilted shirt to brave a snowy peak. Nintendo says that environment will have an affect on Link, and “proper gear will be necessary for survival.”

The stamina system returns from Skyward Sword, and has been integrated into new movement mechanics: for the first time in the Zelda franchise, Link is able to jump. This is tied into the game’s traversal system, which includes sprinting, swimming, and climbing. The climbing system allows Link to scale virtually on climbable surfaces, from cliffs to trees, dependent on stamina.

Aonuma also spoke to the aesthetic of the game and its setting, saying a focus was placed on environmental storytelling and the game’s animation, which is meant to evoke Japanese animation and a painterly, gouache style. 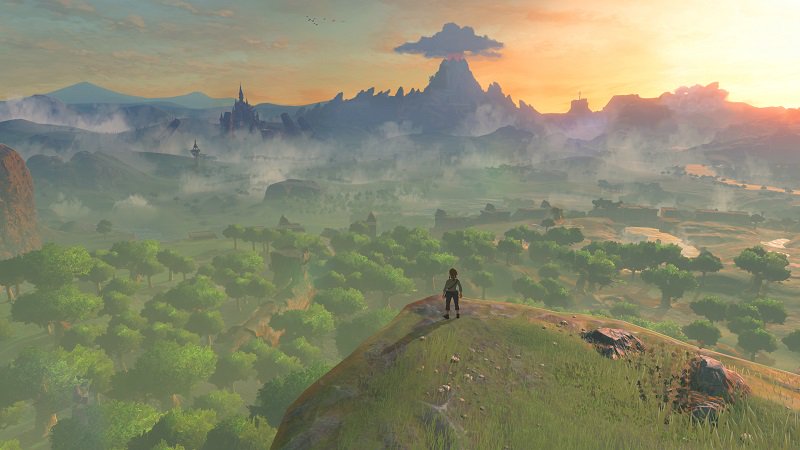 The demo eventually took players to a ruinous Temple of Time, a mossy campus littered with vines and old, deactivated robots. The robots were the same design of enemy demonstrated attacking Link in the game’s cinematic trailer shown earlier in the morning, and they lend further credence to the game’s focus on fantastical technology.

The Legend of Zelda: Breath of the Wild will release on Wii-U and the to-be-revealed Nintendo NX next year.