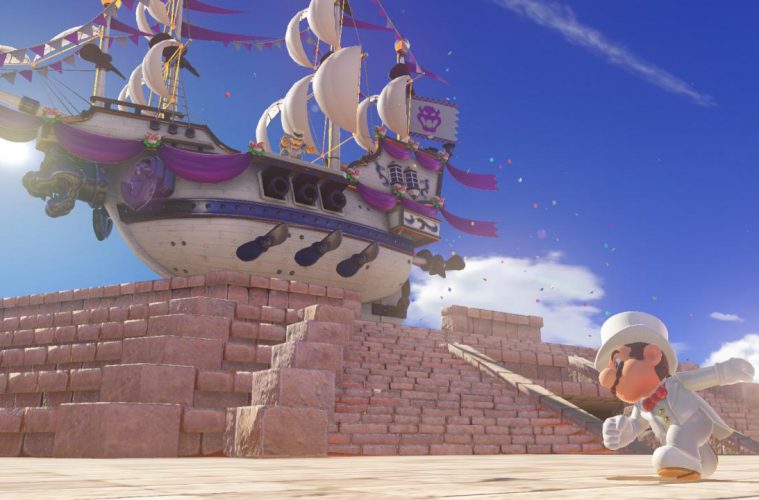 Jump With Me, Grab Coins With Me, in Super Mario Odyssey

The Nintendo Treehouse conference for E3 2017 has heralded the first gameplay look at Super Mario Odyssey. In an extended tour with game director Kenta Motokura and producer Yoshiaki Koizumi, a suite of the Odyssey‘s features were showcased, including the new skills possessed by Mario and Cappy.

The demo showcased two areas, including the previously teased New Donk City; and Tostarena, a desert inhabited by lovely, maraca-playing skeleton men. Motokura spoke to the deep focus on exploration at the core of Odyssey, highlighting the game’s attempts at “balancing a feeling of surprise with emotional resonance.” The devs also suggested a desire to “bounce people back and forth between the familiar and the surprising” with exploration mechanics.

In the New Donk segment, Mario explored the city’s cosmopolitan, mid-2oth century streets, making use of both classic Mario platforming tropes and Odyssey‘s hat possession mechanics. This system allows Mario, through the use of Cappy, to possess enemies and NPCs, as well as transmogrify himself to interact with the environment– this was demonstrated in New Donk City, as the duo became a ball of electricity to surf an electrical wire. Later, it was remarked that Cappy could only possess certain enemies–larger specimens, without hats of their own.

Further incentivizing exploration, the city was packed with side activities and challenges to find Moons, the game’s version of stars. Motokura suggested there were”lots of things beyond following the main story of the game,” with “no time limit, no disincentive” (and no apparent fall damage) to prevent discovery.

The Tostarena Desert section was focused on the game’s currency and RPG elements. Here, the presentation debuted the game’s use of its purple coins as genuine currency, with each world having a unique fiscal system. Motokura remarked that “currency makes a big impression when visiting a foreign land,” and helped to define the game’s spirit of travel.

The final element of gameplay demonstrated was a section of 2D platforming in a mural rendered to look like NES Super Mario Bros. Here, the player seamlessly entered the mural through a pixellated pipe–prompting a change to the game’s score–and platformed through the wall’s art before emerging into 3D again, at its end.

Super Mario Odyssey is set to release October 17th, 2017 for the Nintendo Switch.