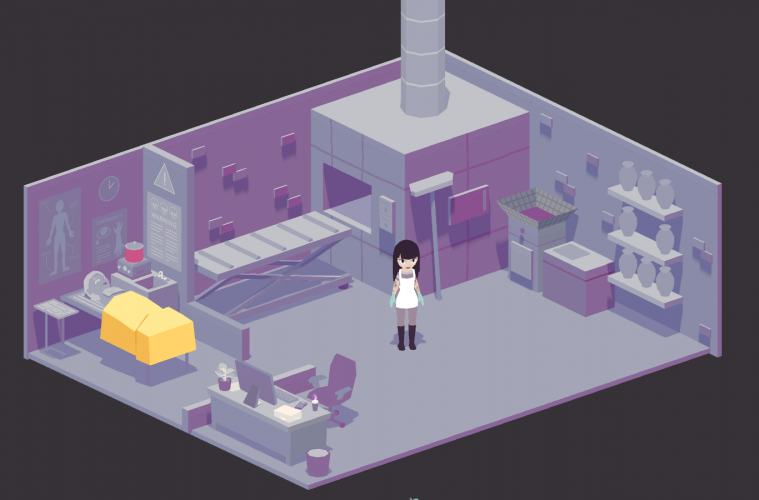 On A Mortician’s Tale: Death Inc.

How is it that the smallest games pack the biggest emotional punches? What Remains of Edith Finch, Gone Home, and The Unfinished Swan all immediately come to mind when I think about A Mortician’s Tale. Games dealing with challenging and emotional subjects in unique ways that come close to demonstrating what games can be, in stark contrast to what so many assume games are.

Of the games mentioned above, A Mortician’s Tale is the shortest. Running at only an hour long, it never overstays its welcome or becomes tedious; Tale hits the sweet spot and remains engaging throughout. You take on the role of Charlie, a young woman who has just started work at a family-run funeral home in her community–it’s not her family’s business but the welcome you receive is warm and familial.

Throughout the course of the story, you prepare deceased people for their funerals and then attend said funerals to pay your respects. All the while, you stay in communication with your employer, who provides instructions for each body; your best friend, who has just taken a job at a museum; and your co-worker, who brings a gallows humour that will be all to familiar to anyone who works in close proximity to death or to trauma. The story is simple, cyclical, and short, with a clear line from start to finish that doesn’t require decisions to be made by the player. You’re guided, step by step, through the preparation of each body that you come to.

What makes Mortician’s Tale shine is the way that it deals with death, and the way that it uses its mechanics to talk about death in ways that we often do not. Death is not a choice–there are no branching storylines when it comes to death; the way gameplay unfolds is representative of the entire theme. One way or another, the road ends at the same place. No matter how we go, when the end comes, it just comes. Mortician’s Tale reflects this–there is almost a monotony to death. Each day a new body comes in, is prepared, and then there is a funeral. Things simply are the way that they are, and it is up to the rest of us to figure it out as we move forward.

So often when we portray death we portray the tragedy of it, the suffering and grieving that families go through. In painstaking detail we see the tearful goodbyes and the trauma caused by loss. Even in programs like Haunting of Hill House or Six Feet Under where we see depictions of morticians, they are often morose or tragic figures. Instead, Mortician’s Tale has one of the most unique presentations of death that I’ve seen in media, interactive or otherwise.

Charlie is passionate about providing dignity and peace to families and to the deceased. Cremated or embalmed, she provides a consistent and gentle service to those who end up on her table. In most cases, there is a Charlie involved in our deaths, too, in some fashion or another. These are the silent, behind-the-scenes people who do a job that most of us wouldn’t be able to, providing a service to families that need to make a difficult time at least slightly more manageable.

Beginning with the family-run funeral home, the service you provide as Charlie in Mortician’s Tale is transparent and traditional. You can view the home’s website during the game, and it lists prices and services with an emphasis on being family-run. Part way through the game, things shift and you are exposed to the model of Funerals-As-Business, a troublingly realistic piece of what might cynically be called the Death Industry. You are instructed to upsell to families, and contracts with local hospitals are talked about in regards to their financial benefits. There is a very present commentary on the way that we prepare and bury the dead.

Mortician’s Tale allows death to speak for itself. There is no gore or gross-out moments. While death is presented matter-of-factly, it’s also presented mildly. The simple, polygonal art style keeps things almost family friendly, while still having you drain the fluid from internal organs. There is no feeling of the game being exploitative, even when it deals with a suicide, and it seems to know that it doesn’t have to make the game shocking to make it impactful. The simple presentation of Mortician’s Tale carries more weight than any realistic depiction of death could, because it presents the occasion as sombre but necessary–as tragic but as a part of life. Someone must do this job, and for now it’s Charlie. For now, it’s you.

Each of the deaths that you encounter within the game are inspired by the real experiences of the development team. This includes the death of developer Gabby Darienzo’s mother, who died of cancer during the game’s development.  It is entirely possible that the body of a woman who died of breast cancer that you prepare during the game is a direct reference, adding a fiercely personal layer to an already emotionally challenging game. Further, the game is heavily inspired by a relatively new movement, the “death-positive” movement, aimed at breaking down the cultural and societal taboos around death, asking us to be more open and explorative about our feelings when someone dies.

A newsletter you receive by e-mail goes over different funeral traditions, etiquette, and even discusses “green burials” – the practice of burying the dead in biodegradable encasing and allowing things to break down and give back to the earth. The idea is simple and perfect, and yet we continue to create what we hope will be permanent monuments to those we have lost, preserving them so that we can tell ourselves that they are never really gone, rather than giving them back to the earth and allowing their passing to create more life, be it grass or a tree. We cling so tightly to these “traditional” ways of burying our dead that the idea that someone be buried wrapped in cloth that breaks down seems shocking or controversial. A Mortician’s Tale asks us to rethink this, and to approach death from a different point of view.

Play this game, and take care of yourself.