On Life is Strange

This blog contains spoilers for the game Life is Strange.

My fingers are caked in the wet, soft earth. I don’t know the cold hand of the girl in front of us, but Chloe does. Above the body, she kneels, wavering, like the merest displacement of air from a ticking clock could send her sinking through the ground like rain. I say something to her, but my voice is viscous, thick in the space between us and lost in its ringing silence. We are deaf. The air is not glass but shards, so that when I breathe I breathe for us both. And when the bullet enters her skull in the hollow burn of the moon, her face melts, and she does sink at last like rain, warm rain.

From the very beginning of the series (can I call it a series, or is it simply a game with chapters broken into different downloads?) Life is Strange had flaws. At times they were loveable. The cheesy dialogue bordered so bad it’s good territory, and the washed-out pastel colour scheme soothed the otherwise jagged textures and models. After the release of the first episode, I tweeted my admiration of the game’s sound design:

In particular, its soundtrack, while eclectic, was evocative and the licensed tracks well-chosen. For a while, I would listen to the game’s playlist on Spotify, because it would almost certainly be a place to find some good music.

But other times, the flaws in Life is Strange were detrimentally unforgiveable—particularly in its second episode when it handles Kate’s suicide. And by handles I mean lets go of the wheel on an icy highway and veers haphazardly into a ditch, crumpling its hood like an accordion before rolling 14 times like a rotisserie chicken. Like my mixed metaphors, Episode 2 simply did not work. And it’s a shame that it didn’t because it was a brave topic for Dontnod to attempt. The episode seemed rushed, and felt contrived as a result.

But, fortunately, it got better. 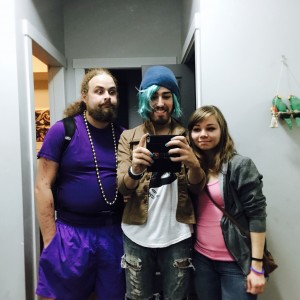 My “so bad it’s good” Chloe costume from Halloween

Dontnod liked Chloe—that’s evident through the entirety of the series. They paid attention to Chloe. They cared about Chloe. They gave Chloe the moments in time she needed to become a worthwhile character. Because of all that, I liked Chloe. While atrocious at dialogue, the writer at least penned one memorable character. When Dontnod drew out Chloe’s moments, as they did in the penultimate episode, Life is Strange succeeded. It’s deft, emotional, and honest. To make a surreal world feel real is an achievement on its own.

If Episode 4 is where Life is Strange twinkles, Episode 5 is where it shines with the last pulse of a star before it fizzles out. Max’s abuse is handled tremendously; the dreamspace—a long, drawn out scene—is evocative of the best moments of surrealism in Alan Wake; and the bittersweet sliver of happiness Max gets in the art museum are all among the series’ best moments. Each of these scenes are long (10+ minutes if you take it all in, as you should), but then Dontnod makes a fatal mistake: They panic.

The four-minute finale sequence of Life is Strange‘s canonical ending is completely devoid of dialogue; the writer scared to death of fucking up, and Dontnod unsure how much narrative to leave open. The poetics that Dontnod achieved in its finest hours were completely lost on a cliché closing that was far too cyclical for a game about agency in defying time. Even worse, the agency lacked any consequence, despite the harsh promise of so much despair.

Life is Strange is like Chloe—smart and beautiful—but I wish it had more time.