The Screenwriting Trap: Games are not movies

What defines a film? Most people would say ‘a series of moving pictures.’ Ask the definition of a videogame, and the answer is a bit more obtuse; a videogame is usually defined by interactivity and a presence of a win/loss-state. With horror films, you sit yelling at the screen, arguing the protagonist’s decision-making abilities and quietly crying to yourself whenever a scary face pops up in the background. In a horror game (particularly in survival-horror) you’ll be the one taking agency in going through that door, and the scary faces are often delegated to your imagination; you see the way forward under a flickering light, but try every single other door, window, and ventilation duct before even considering going in that direction. In a game, you have only yourself to blame. The duality between film and games then lies in one thing: the screen—a lazy excuse as to why “videogame writing” is trapped under the “screenwriting” umbrella, and ultimately why games often feel like movies.

The reveal trailer for last year’s Call of Duty: Ghosts advertised that its story was written by Academy Award winning writer Stephen Gaghan. It was a big moment for games, as it was the first time a writer was featured prominently in a reveal trailer—not even The Last of Us had a nod to its lead writer, Neil Druckmann, despite the man being one of the most competent writers in the industry. Ghosts released during a particularly good year for games writing; Bioshock Infinite and The Last of Us both offered some of the best stories ever seen in games within just a few months of each other. Expectedly, the Stephen Gaghan announcement got critics talking: perhaps Call of Duty was going to take itself seriously for once.

Oddly enough, writing a film and writing a game are two different things; Ghosts’ story was mostly panned by critics (albeit enjoyed by players), and the reveal trailer for Advanced Warfare ultimately made no mention of its writer—the fish AI seemed to be dead in the water. Despite a deliberate attempt to move away from screenwriting after Ghosts’ shortcomings, Advanced Warfare seems to have only dug itself halfway out of the screenwriting trap.

When I first reached Atlas HQ in Advanced Warfare, I took a stroll. I stumbled upon a scoreboard at a shooting range which featured the name “Ilana” at the top position, a character whom I would later find to the best shooter around, and my new squad partner. Inside HQ, I found a plethora of water bottles labelled “Eco Thirst” which received no explanation beyond their existence. Both of these world-building devices (continuity and depth) are expected in any form of writing, but are especially appreciated in a game world because they fill out the game space beyond its linear paths. 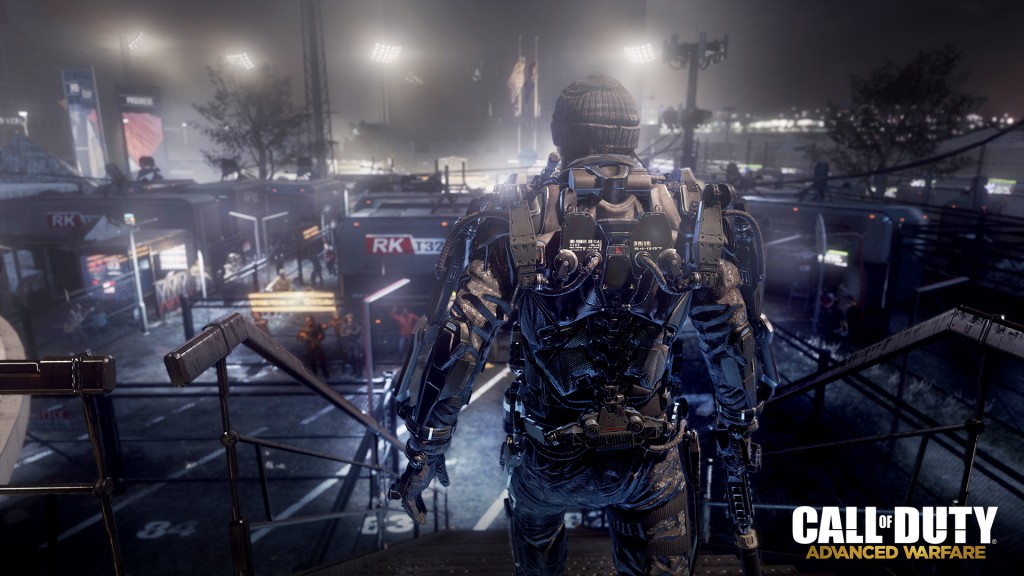 Detroit was another level which used game-space to detail the logistics of the refugee camp; there were lines of people waiting for resources, armed soldiers guarding every corner, and a woman on a loud-speaker detailing the process of DNA identification and how refugees could receive food. In these moments Advanced Warfare built story using game space, one of the defining differences between games writing and screenwriting.

At the same time Advanced Warfare offered advancements to the series, it still felt hindered by a lust for a cinematic experience. The game opens with a CGI cutscene—a new addition to the series’ usual formula of divulging narrative during loading screens. Offering narrative during blank space is a great idea, but Advanced Warfare does it clumsily; the dialogue is exposition-heavy, and the cutscenes add nothing worthwhile beyond emotional proximity and the ability to enjoy Kevin Spacey’s performance. The CGI cutscene is proceeded by a telegraphed, in-game cutscene which further offers players zero control to even look around, and when gameplay is finally introduced it’s in the most basic form of quick-time events.

And then there’s the dirty L-word: ludonarrative dissonance. It seems every year Call of Duty wants to cause a shit storm, and this year it came in the form of an embarrassing scene that seemed to disparage everything that defines a game. At a funeral for the player character’s friend, the game prompts players to approach the coffin and “press x to pay respects.”

Press a button to feel an emotion.

One thing cinematic games really like to do—and something films play with constantly—is the progression of time. The aforementioned Detroit scene in Advanced Warfare takes place four years after a global terrorist attack shattered the United States. To introduce the changed world, the player is subjected to expository dialogue filled with information their character should already know from living in said world for four years–information that the player can likely infer. The loading screen clips beforehand are in traditional Call of Duty vein, offering not a cinematic cut-scene, but a quick glimpse of fictional newscasts depicting global turmoil at the hand of a terrorist, followed by an advertisement that introduces that Atlas has been aiding refugees. Every aspect of the Detroit level is designed to show this information intuitively. In a film, that initial dialogue would likely be necessary because the world is restricted by screen space. But Advanced Warfare is a videogame, and it constantly undermines itself by pretending it’s anything other.

This article was originally published on cgmagonline.com on December 9, 2014.