On Thomas was Alone

I’m playing a game about squares. I’m just past half-way through the story and the platforming is beginning to frustrate me. I unlock an “achievement” for 100 deaths and I’m fairly certain that at least 50 of those were in the last 6 levels alone. Beside me, my girlfriend is beginning to sneeze—not once, not three times, but about 18 bajillion times in the span of only a few minutes. It’s either her allergies acting up or a cold coming on. Maybe both, I don’t know. But she won’t stop sneezing. The level restarts. The narrator repeats. She sneezes. I bless her every single time. I die. She sneezes. I die. I bless her. Die. Bless you. Die. Bless you. Die. God damn it.

I want to be alone.

I don’t know what I expected when I finally picked up Thomas was Alone, but considering its high regard, I certainly expected more. Maybe the game gets the rep it does because it did it early. Before the indie revolution saturated the market with abstract narratives and “minimalist” (read: lazy) art styles. Maybe I’m just sour that I died so much.

Thomas was Alone isn’t bad. In fact, it’s memorable and effective in many ways. The characters felt human in the way they were portrayed, despite the fact that they are (superficially) quadrilateral incarnations of artificial intelligence with no visible characteristics besides their arbitrary colouring and the lengths of their sides, which in turn dictate their generic-at-best platforming mechanics.

If you can even consider my sensationalism as criticism then please know that I know that it’s poor criticism. Developer Mike Bithell (the humble sod) has publically stated his awareness of, and arguments against, the public perception of the game’s art-style and industry impact. 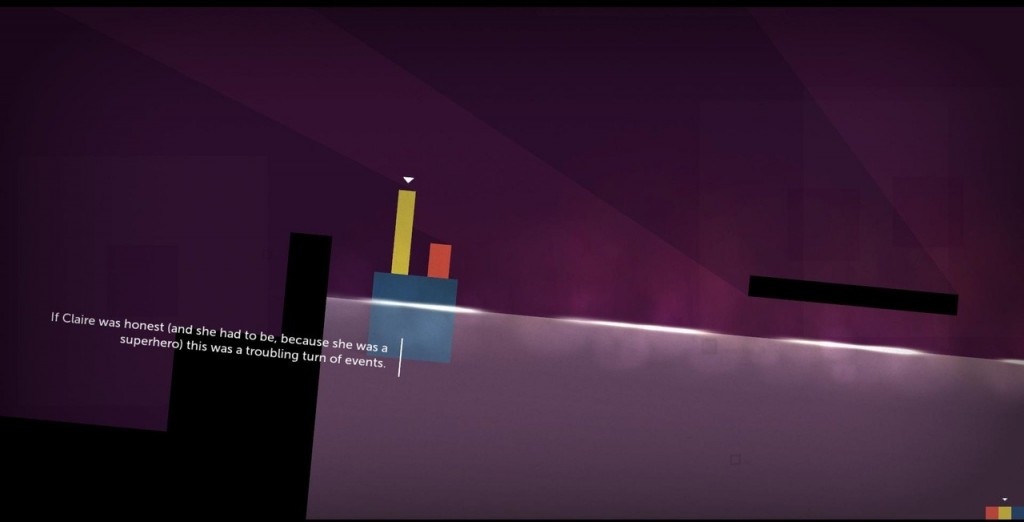 But Bithell doesn’t need to defend himself; there’s a charm to the geometric characters (as comes with successful minimalism), and it works in the context of the game’s motif of interdependence—of the way we, and the world, fit together, much like the shapes do to solve puzzles. The vague shapes mirror the game’s own abstractions, for better or for worse, and the colours support colour theory as most art does. However, these successes don’t mean that Thomas should be excused entirely.

Thomas was Alone suffers from “why am I a game” syndrome. Bithell has a good story in Thomas, and, with the exception of the ending, that story is executed well. But, what makes it an interesting game? Self-publishing is a thing in the world of literature, but it seems to garner much more success in the game world. Why did games critics and audiences eat this game up like Doritos on a Saturday evening, when any self-respecting book reader would shy away from poorly written prose no matter how compelling the premise or dust jacket is. Is it the industry’s notorious nepotism? Is it its youth? Yes, Thomas was Alone does things well. But almost every single one of the things could have been achieved in a different medium. It seems that Thomas was Alone is only a game because it’s Bithell’s preferred medium, and not because it’s the medium it deserves.

The puzzles, with the exception of the occasional subversion of expectation, are rudimentary and often boring. There’s a complete disregard for pacing—to be clear: I do not mean the ending, because the ending worked for me, even if it didn’t for others—and there’s odd difficulty spikes that make the game feel like a bucket list of level ideas with no deeper meaning. Hell, in the final credits, one level’s inception is accredited entirely to someone else as though Bithell was pulling desperately for inspiration. Maybe I’ve been playing too much Antichamber recently, but for such a symbolic, analogous game, you’d think Thomas could do better than “this level displays the relationship between character A and character B,” over and over again. Thomas was Alone creates conversation, but those conversations are about character interactions, not player interactions. In Thomas, the player is a tool for linking contrived character moments, rather than a vessel for inciting those moments through subjective play.

So: Why is Thomas was Alone a game? 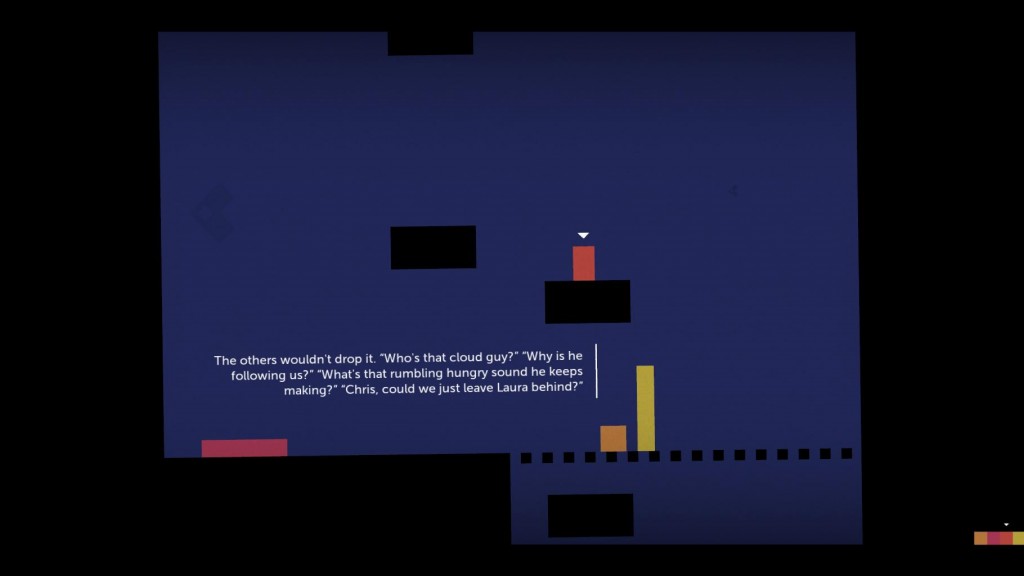 During the penultimate chapter of Thomas was Alone, the aforementioned sneezing happened. Thomas features multiple characters, but it only offers single-player co-op, so my partner had just been watching and occasionally interjecting with verbal assistance (read: words). The sneezing comes in not as assistance but as a sound effect coupled with the awful noise the game makes when one of your shapes explodes. I feel like one of the characters; I crave silence and solitude. But, a moment later, I smile.

Controlling a stout square, Chris, I help a skinny rectangle, Laura, make an otherwise marginally impossible jump—a mere sliver of space, barely a centimeter on screen is conquered—by allowing her to jump on my head. The solution here wasn’t linear (as the same solution had been previously), but it was the one I was drawn to. The story had told me that Chris and Laura were in love, and part of me must have believed it. The moment is glossed over; the first time a nuance has been left un-narrated. It felt honest and true. Like tangible love.

My girlfriend laughs and I look over to her.