This article contains spoilers for the game A Dark Room.

Even in the face of mainstream scrutiny during the embarrassing #gamergate debacle, there was an optimistic perspective from well-respected magazines and other publications that videogames are, despite all odds, an art form; a piece from The New Yorker concluded that games have “a vibrant future,” while the New York Times continues to categorize its video game articles online under both ‘technology’ and ‘arts.’ In reality, there’s not much of an argument to put against the notion; art is, by definition, a creative work that affects its viewers, usually emotionally—a response nearly unanimous upon the release of games like Bioshock, Journey, and The Last of Us. To take the argument one step further, I’d assert that games are not just art, but poetry.

There’s no arguing the stigma against games, most evident when I’m at Thanksgiving dinner and my girlfriend’s grandparents ask what I do for a living over a bowl of mashed potatoes. When I tell them I play and write about videogames there’s usually a long pause where their potatoes slump onto their plate and they say, “Oh, that’s unique,” before changing the subject and asking what my favourite colour is instead. A similar experience can be attributed to the resistance to poetry by the younger audience, and perhaps that’s why the two go so well hand-in-hand.

An old idiom expressed in the world of literature is that “poetry cannot be paraphrased.” The most well-known argument for this comes from critic Cleanth Brooks’ The Heresy of Paraphrase in which Brooks states that “[a true poem is] an experience rather than any mere statement about experience or any mere abstraction from experience.” In laymen’s terms: the act of reading a poem is part of its poetry. The same can be said about most videogames. If someone were to ask me, “What’s Call of Duty about?” I would probably say, simply, “It’s about playing ‘hero,’” but if someone were to ask me, “What’s Journey?” I’d have a hard time saying anything other than, “You’d have to play it”—it cannot be paraphrased. 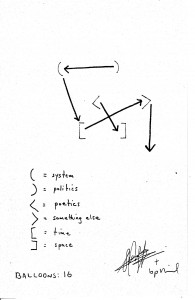 Take a look at the renowned poetry of E.E. Cummings or of Canadian poet bpNichol, both of whom work with the space on a page as though it’s an entity in of itself. Even when a poem isn’t considered “visual,” line breaks and other poetic devices are utilized to create a ‘dialogue’ between the reader and the writer. This is the same ‘dialogue’ as between the developer to the player; the page is to poetry as the screen is to games. Unlike the linearity of most cinema or novels, games are meant to be meandered through, they’re meant to be observed and interpreted, and it’s that agency of interactivity—and the dialogue between developer’s and players—that sets games apart more than any other medium.

In a blog post, arts critic Lana Polanksy discussed the “poetics of play,” and her experience with what was essentially an interactive poem.

“There’s an explicit and implicit grammar to poetry,” Polanksy says. “There are spaces and pauses in which readers are made to contemplate, to see where words are organized in line and in syntax to create some kind of meaning.”

Consider now the “spaces and pauses” in videogames. Imagine playing Super Mario Bros. for the first time: The game’s mechanics are taught intuitively through the space on the screen (through the dialogue between you and the developer), and when you reach the first question mark block, or your first green pipe, there’s a pause of curiosity. Videogames have an unmatched ability to allow players to veer off the written path and remain immersed. The audio logs of Bioshock, the easter eggs of San Andreas—these moments don’t need to be profound to be poetry.

With the exception of books by writers like James Joyce, you likely won’t be dissecting every aspect of a novel’s writing, just as you wouldn’t scrutinize every pixel in a game world. Most contemporary poetry is brief but layered in complexities that can only be discerned through the reader’s agency of interpretation (or, interaction)—a perfect parallel to experimental or small team “indie” games. It’s here that we echo back to paraphrasing: in the 2014 film Pixel Poetry, games critic Adam Sessler says “[high concept games] are tough to actually explain to someone without allowing them to play.” It’s those focused, innovative games that stand out as poetry.

Beside me, my girlfriend is playing A Dark Room on her phone. She’s far from what I’d call a gamer (she played Threes for a bit, and thinks Pokémon are cute), but she picked up the game after I almost immediately brushed it off for boring me. An hour later, she shouts, “Holy shit, there’s a spaceship!” and I look out the window. There’s not a spaceship. There’s a text-only videogame that began with the simple words “light fire.” A videogame that brought her to a tangible moment of profound emotion.

This article was original published on cgmagonline.com on October 30, 2014.