Civilization: Beyond Earth Review: Through a sci-fi filter

The Civilization series has become a household name in the 4X strategy genre, giving millions of players the chance to guide a historic civilization to stand the test of time. Civilization: Beyond Earth is the first in the series to move past true historical eras of mankind and into the far-future—colonizing the stars in an ambitious diversion from the main formula.

In Beyond Earth, humanity has fled to the stars in the wake of “The Great Mistake” that has left Earth uninhabitable. You’ll create buildings and units, and develop technologies and social policies to achieve set goals. Buildings give bonuses to cities, and your units will traverse the randomly-generated map to scout terrain for new colonization possibilities or to attack hostile natives and other civilizations.

Each unit (naval, land, and aerial aplenty) has strengths, weaknesses, and varied movement and attack ranges for you to strategize. Sleek edges, neon glow, and reflective metal paints both the units and the cities. The planet designs are rich in mossy greens and cerulean blues, with mountains and canyons edged by dusty earth tones. The natural resources of the worlds, such as the purple, rune-etched Floatstone, stand out vibrantly.

To learn about the game’s alien worlds, Beyond Earth features an in-game encyclopedia detailing the various buildings and units you can craft. Each entry reads like a thought experiment on what deep-space colonization could bring humanity as a species, including a plethora of theorized future technologies and Wonders of the World. Reading the entries is like reading experimental, bite-sized science fiction.

Beyond Earth puts you in constant war with the native inhabitants of the land—aliens to us. Aliens have unique units ranging in strength, like the mighty Siege Worms which roam beneath the ground and monstrous Krakens which rule the sea. These units will effortlessly decimate your armies even three or four hours into a given game, so the seas become much more dangerous to explore. Even on low difficulties, careless building and exploration will cause you to lose many units to the native fauna. Unless you choose to dominate each of the world’s capitols, there may be entire portions of the planet you’ll never see. 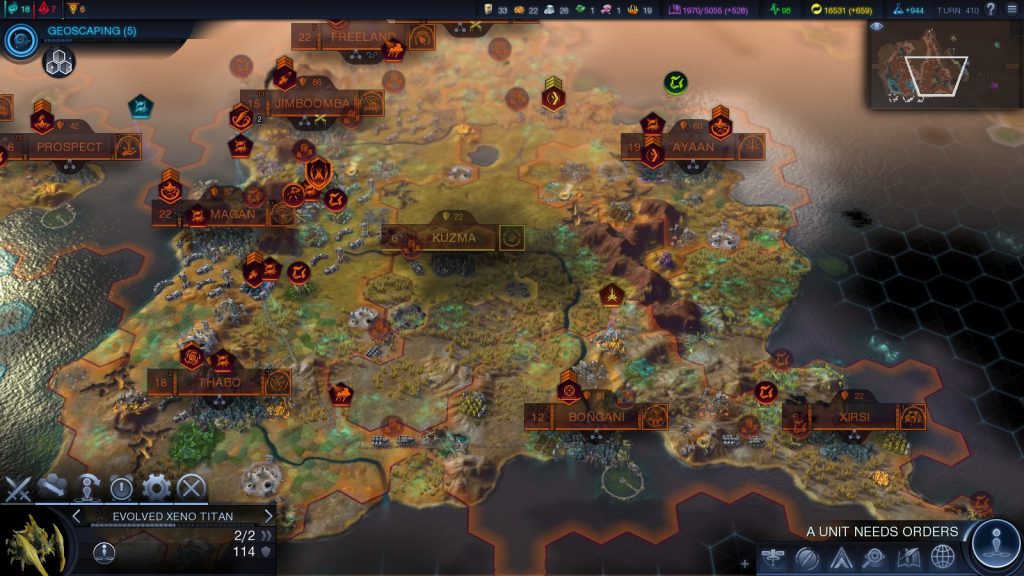 When you build a soldier at the beginning of Beyond Earth, you can keep that unit throughout your entire playthrough. This removes the constant need to keep your units in line with current technologies like in previous Civ games, but part of the fun in those games was advancing units from using sticks and stones to nuclear warheads. In Beyond Earth, you just have space-age units for the entirety of the game.

What Beyond Earth adds instead is ‘Affinities,’ philosophies which guide your civilization on its path from a simple colony. Affinities grow deeper and more complex as you upgrade your units in tandem, giving advantages based on the ideological approach consistent with each path. Each of the three affinities (Harmony, Purity, and Supremacy) carry different political and philosophical ideals. Other AI players will think highly of you, or condemn your lifestyle, based on whether you share an Affinity with their civilization. These then heavily influence your global play style, how your units will upgrade, and the variance of units and buildings you can create.

You can dip your toes into all three Affinities, rather than focusing on one for the entire game, though the game encourages the latter with bonuses and rewards for advancing each Affinity. In my early playthroughs, I focused on a single Affinity, Purity, until I received most of its bonuses and associated win conditions, such as bringing the remaining humans on Earth to their newly constructed home via warp gates. It wasn’t until I was more comfortable with Beyond Earth’s systems and the strategy of each Affinity that I started to guide my civilization into hybrid affinities, splitting Harmony and Purity down the line.

Affinities also affect diplomacy. Often, AI civilizations will be in need of a specific strategic resource, and this is resolved by trading favors. You can trade resources to net some extra gold per turn, open borders between regions, or exchange another strategic resource once the desperate AI civilization is back on its feet. Affinities allow you to visibly see your civilization adapting to its new philosophies, whether by with the native species, purifying your ties to humanity, or moving from crude bio-matter to machine-augmented flesh.

Beyond Earth tries to keep things fresh with the Technology Web, a branching representation of the technological advancements available for your civilization to research. In a traditional branching ‘tree’ system, you’re forced to eventually take the majority of each path. With the web, you start at the very center with the availability to advance in any way you want. However, the Beyond Earth’s tech web is clumsy compared to the streamlined tree systems used in previous Civilization games. There were multiple times when I missed out on researching what should have been a simple branch, instead costing me precious time on my journey to victory.

With the Technology Web, the old ‘Eras’ feature has been replaced. Civilization games would normally progress through Eras as you researched key technologies. Researching into industrialization, for instance, would lead to the Industrial Era, giving you access to buildings, units, and Wonders appropriate to the time-period. Because Beyond Earth is set in humanity’s future, we can’t know which eras we will be entering, so the Technology Web posits ideas and theories without fulling fleshing them out. Brainstorming for five minutes, I conjured up the potential but Beyond Earth offers none of that. 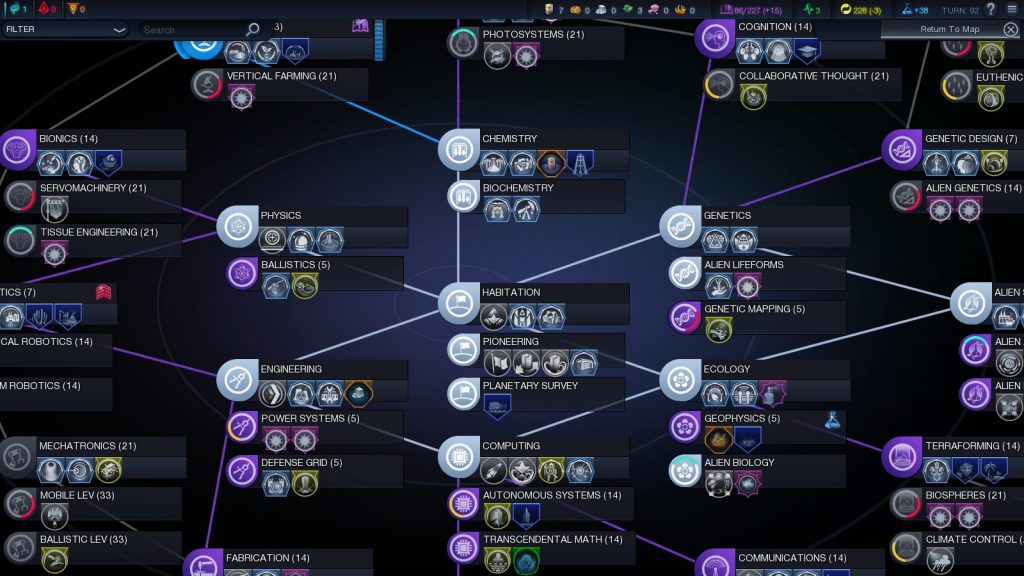 It’s not just the Eras feature that’s been scrapped in Beyond Earth, but one of the core things that made the Civilization series exciting: the ability to choose real leaders from throughout history. You could relive Julius Caesar leading his mighty Roman empire, or play Washington and conquer the world through manifest destiny. Beyond Earth instead uses ‘Sponsors,’ organizations comprised of geopolitical groupings (for example, The Pan-Asian Cooperative) with a chosen leader. These leaders have almost no personality compared to Civilization V, which had leaders like Montezuma of the Aztecs. His special trait bonuses led you to focus on killing barbarians and weaker civilizations early in the game, making you feel like the real Montezuma during his reign. Beyond Earth’s Sponsors offering only a bonus to city growth speed and trade routes is just boring in comparison.

Beyond Earth tries to simplify the formula too much. It cuts away the twigs and growths that made each game of Civilization different, and it leaves a stripped trunk that, while still fitting as a Civilization game, ultimately feels bare. If you are new to Civilization, this is not the game for you to start on; Beyond Earth does not show a fraction of what Firaxis is capable of with Civilization. It doesn’t show the rich past and sprawling histories of real civilizations that made the series what is today. Instead, Beyond Earth feels like well-written, space-age fan-fiction from the talented members of Firaxis. But it is nowhere near their magnum opus.