I’ll say right from the off that I am not someone who engages with a game that sells itself on being “hard”. If all you can tell me about a game is how hard it is, how punishing it is, and how if you’re not going to “git good” then you’re just a “casual” who probably games on consoles anyways. This reverence for difficult games and the culture of wearing those games like badges of honour have never struck me as particularly good reasons to play. For me, it has always been about two things: story and fun. Those two things create a spectrum of gaming for me and a game can succeed or fail if it can’t offer either of those two things. I can handle a story being weak or even absent if the game is fun, and can handle a game that might not offer a huge amount of fun if the story is particularly compelling. It’s this reason that has me giving up on games like Bloodborne which, despite being beautiful and interesting, was a game that stopped being fun to play for me pretty quickly.

So, now that I’ve outed myself as a filthy casual, lets talk about Cuphead, one of the best games I’ve ever had the privilege of playing in my 28 years of living on Earth.

Part of why Cuphead works so well is its visual style and soundtrack. The game is presented in the style of vintage cartoons that are too old to pretend to be nostalgic for, and Cuphead captures that style in a stunning and colourful way. The overworld and individual levels feel like watching short episodes of a cartoon series about a cup-headed monster, and everything feels so seamless that if there wasn’t a controller in my hand I would probably forget it was a game and not an actual cartoon. The soundtrack also perfectly captures the era and the 1930s style of cartoon that StudioMDHR was going for. Add to that the film grain effect that stays consistent through even the loading screens, and you have one of the most visually engaging games of the year, by a mile.

In an era of brown and grey, grim and gritty shooters and third person sandbox games, Cuphead comes as breath of fresh air, with all its colour and personality and charm. The story is a simple one, Cuphead and his brother Mugman make a deal with the devil himself, which of course goes badly. Then you, or you and a friend, embark on a mission to claim the souls of the numerous bosses you battle through the game. 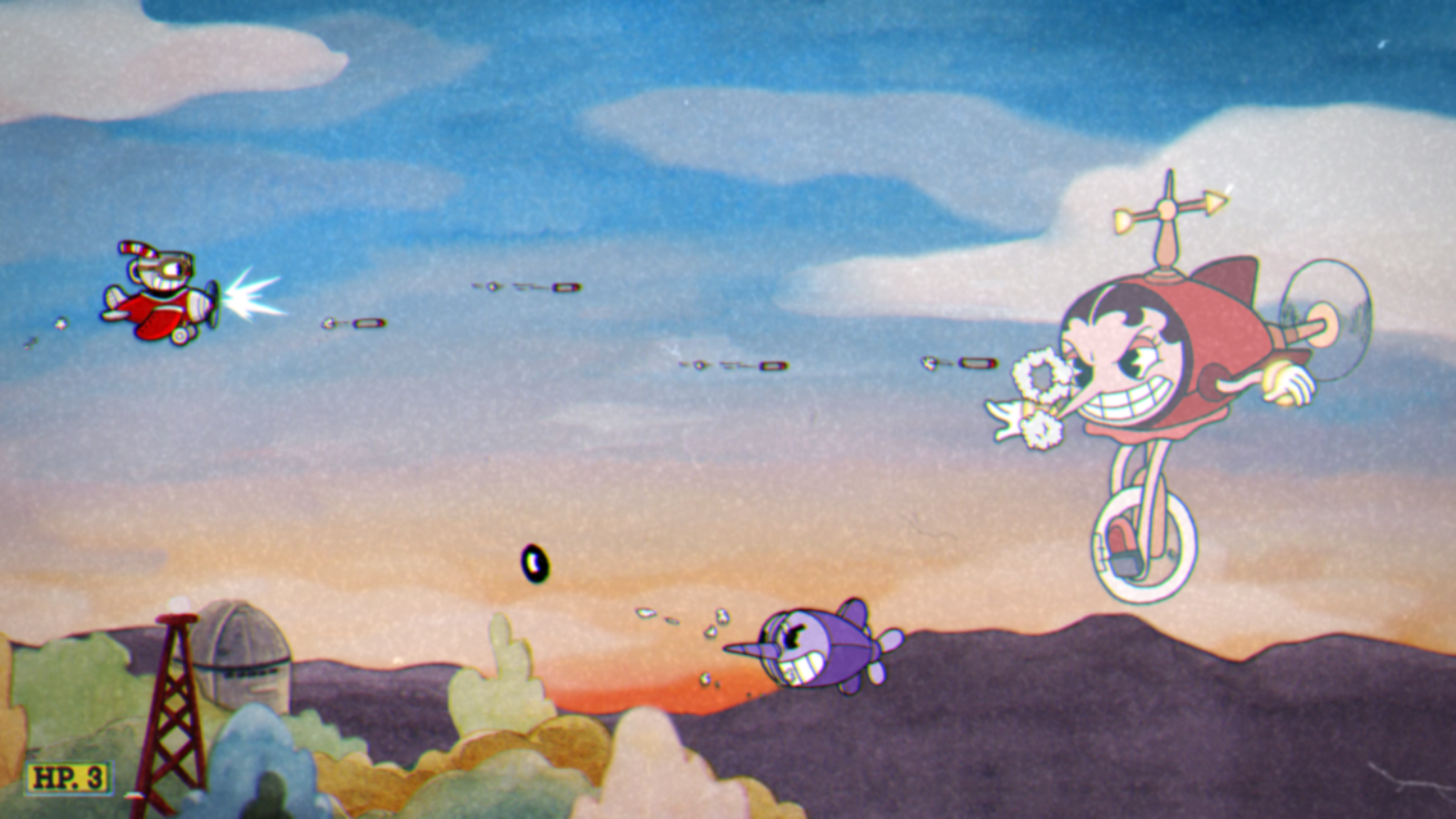 One of Cuphead’s variant fighter-plane levels; Studio MDHRBoss battles make up the majority of the Cuphead, and it is immediately clear that these are not supposed to be simple fights. Even in the first few battles I found myself with a real sense of accomplishment at defeating the bosses I came up against. Especially when I realized that I had done so without the help of special movies, as these had been assigned to a button that did not exist through my own error. The few times that you do not throw down against a giant and challenging boss, you will find yourself in the run-and-gun levels, which prove to be challenging and infuriating in their own ways.

Perhaps the biggest cause of frustration comes from a screen that will pop up when you inevitably die, that shows you exactly how far through the level you had made it up to the point when you were killed. It taunts you with exactly how close, or far, you were when you met your demise.

The difficulty, of course, seems to be all anyone can talk about: Cuphead is a hard game. Hard as hell. It already represents the most time that I’ve put into a game that killed me over and over again, because I just can’t get the game out of my head. At no point, at least in the progress I’ve made so far, do I feel like I am losing because the game is designed to make me lose, but rather because the game wants you to understand how it works and to remember the small details each time you play a level. The losses, even at their most frustrating are very clear in showing you that they are your own fault, that if you had done something differently or reacted a bit faster you would have been able to win. Where some games seem to relish in your suffering, Cuphead seems to take the tact that if you want to win, you really need to earn it.

This makes the victories feel all the more satisfying. At the time of writing I haven’t completed the game, but I can’t see myself walking away from it at any time, even though I find myself facing bosses that are challenging to a degree that I’m not used to. Each bit of incremental progress I make in each attempt gives me some insight that I’m doing something right or that I need to adjust my strategy a little bit, and I’m seeing results as well. It’s a game that rewards learning the mechanics, and finding a balance between hair-trigger reflexes and exceptional patience.

Cuphead is a hard game, and this is going to deter people right from the get go. Don’t let it. While there’s no denying the challenge presented, it’s such a beautiful game that it deserves all the eyes on it that it can get. StudioMDHR have created something truly special here, and there’s just no good reason not to check it out. I was even skeptical I could get the thing to run on my laptop, considering I have put an investment of about zero into building a gaming PC, but I was thrilled when the game ran not just well enough, but perfectly. Proof that it does not require a demanding PC, but does require some patience and perseverance. Also, buy that soundtrack, because it’s fabulous.