Fallout 4 Review: Home on the Wastes

Fallout 4 really does feel like coming home. After the massive success, and enormous personal time sucks, that were Fallout 3 and Fallout: New Vegas, the anticipation for this fourth installment was palpable. It was impossible not to hear about the game—just ask my roommate—and it almost began to feel like there was no way a videogame could live up to the hype that was building around it at such an exponential speed, and yet it Fallout 4 delivers in all the ways we could have hoped.

For returning fans of the series, Fallout 4 will not be offering any massive overhauls in controls or general aesthetic, so it feels like familiar territory from minute one. This is while being an easy enough game to pick up and play, even if you’re brand new to the franchise. While the running-and-gunning may not be as smooth and polished as those coming from a background of dedicated shooting games may be used to, that’s never been what Fallout is about. The combat is better compared to that found in Skyrim than the previous Fallout games. Fallout 4 is smoother and less clunky than previous installments, but retains a unique feeling apart from most other FPS offerings.

In terms of the major changes in gameplay, the list is short. The character creation is more streamlined, and uses sliders to offer a massive amount of customization to your character. As well, this time around you are able to look at a storage device and know what’s inside, without having to open up a fresh new menu every single time. This, bizarrely, took me the longest to get used to of all of the new features. I found myself instinctively pushing circle to back out of a menu and opening up my Pip Boy instead. It’s a little detail, but when you put as much time into Fallout 3 as I did, it does become a reflex more than anything else. There’s also a pretty minor change to the V.A.T.S mechanic which, in previous games, stopped time completely. In Fallout 4, it only slows time down. With those exceptions, the rest of the game controls the same way as the previous installments, only with more polish than ever. 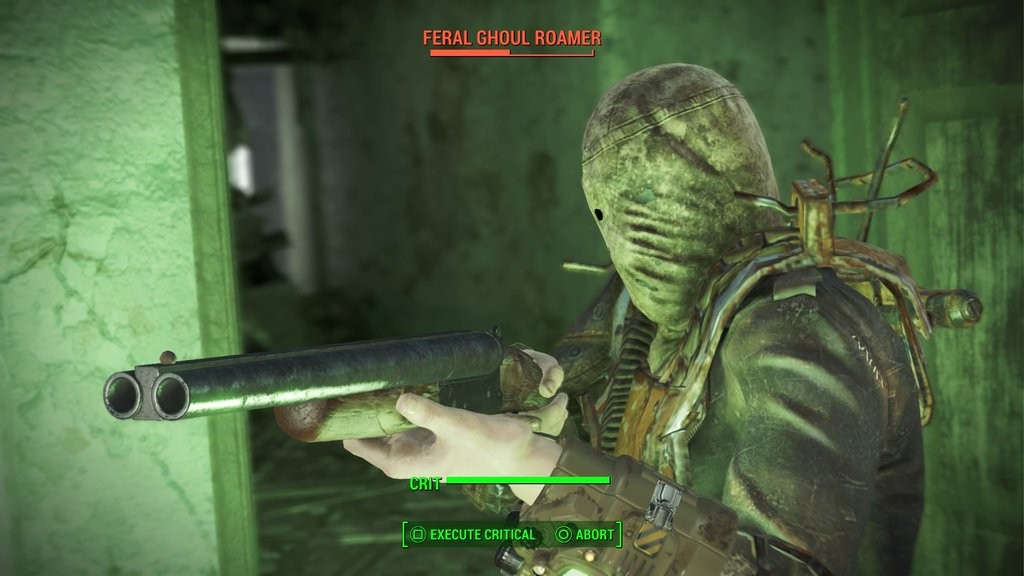 While the general game has stayed the same, there are brand new mechanics which start to set Fallout 4 apart and make it feel much bigger than its predecessors. This time around, you are able to build and maintain settlements all over the Wasteland. The nice thing is that you finally have a use for the plethora of junk you will gather throughout the world. The downside however, is that the building process leaves quite a bit to be desired. The biggest issue with the settlement building is that it’s all done in first person. It would have been great to have the ability to switch to a bird’s eye view to make placement easier and a bit more intuitive. It’s an interesting mechanic though, and it adds to the length of the game.

The crafting system, on the other hand, is something that I’ve enjoyed this time around. The system is deep and comprehensive, allowing you to change a huge amount of things and really make your weapons your own. You’re also able to craft and upgrade armor, which doesn’t feel quite as involving as the weapons crafting does, although it does allow you to make use of the armor you have and build it up, rather than replacing it as soon as you find something better. Power Armor is also readily available, and it can be unlocked early on as well. There is no special training, or anything else to prevent you from using the armor. Once fully customized, you get a lot out of the power armor—it’s fun being powerful— and it incentivises you to keep your suit in working order.

The beginning of Fallout 4’s main story is what sets the tone for the game. For the first time in the series, you are given a look back at the time before the nuke as well as a bit of background on your character’s family life. Rather than being an entirely blank slate to project yourself on, you have some background to build off of; the context really helps. The tone is also considerably darker than the last two games, as you experience the bombs being dropped—and the world ending—first hand. You feel the panic and the desperation in the characters, and I even found myself anxiously bolting ahead of my wife and child. Fallout 4 opens strong and keeps on going at a great pace, even though the world is massive and open for you to do freely whatever you’d like.

All in all, Fallout 4 feels like familiar territory with enough new features and polish added to make it feel like a unique and new experience. The story is strong, the characters you come across are engaging, and there is so much there to explore and to find. This is one of those rare games that manages to live up to its hype, and give a truly fantastic experience. A strong recommendation for anyone looking to return home to the Wasteland, or looking to try an RPG a bit (a lot) more accessible than The Witcher.

This game was reviewed on PS4 using the editor’s personal copy. Fallout 4 is also available on PC and Xbox One.