I remember finding a collection of award plaques in the bottom of a cabinet in my basement. The plaques were engraved with my mom’s name, Alison Smith, and the name of a business I didn’t recognize called Second Look. One was for “The Best Manicure in Regina,” while another was for marketing. Until then, I had no idea my mom ran a successful esthetic business in the 80s. As a child, I was fascinated with all the things I could find in my house that told an unfamiliar story about my seemingly familiar family. You get the chance to engage in that same kind of discovery with developer Fullbright’s inaugural effort, Gone Home.

It’s June 7, 1995. You are 21-year-old Kaitlin Greenbriar, and you’ve just arrived at your family’s new home after spending a year traveling Europe. You expect your parents to be home, but the front door is locked and the house is silent. Your younger sister, Sam, has left a message on the door:

Katie, I’m sorry I can’t be there to see you, but it is impossible. Please, please don’t go digging around trying to find out where I am. I don’t want mom and dad anyone to know. We’ll see each other again someday. Don’t be worried. I love you.

“Digging around” is probably the best way to describe gameplay in Gone Home. You get to dig through the Greenbriar home, opening drawers and cupboards, and finding letters, diary entries, and crumpled notes that provide narrative and help you unlock more areas of the house. The Greenbriar home is an encapsulation of 1995 and is full of archaic gems. The notes (usually written exchanges between Sam and her classmates) are a reminder of what correspondence looked like while bored at school before text messages existed. You can examine a TV listing that tells you that the X-Files—the original series, that is—is on at nine, and Walker, Texas Ranger is on at ten thirty. In Sam’s room, you can find a piece of paper scribbled with Street Fighter II moves, and later you can find the impact the game had on one of Sam’s friendships. Playing Gone Home had the same effect on me as listening to “1979” by The Smashing Pumpkins: It didn’t just remind me of the 90s, it transported me there. 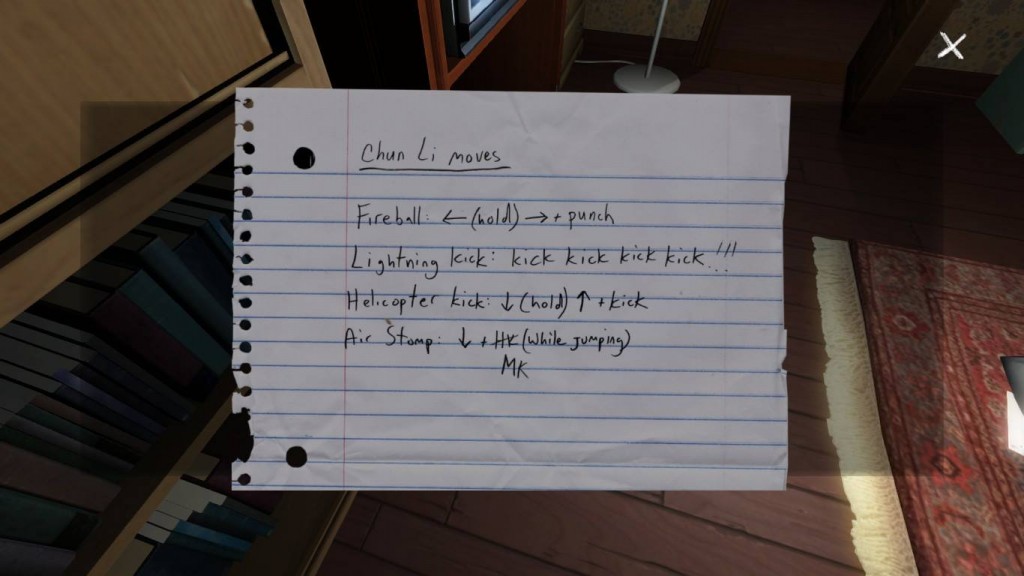 Despite the nostalgia, Gone Home isn’t simply a case study in 90s culture; there is a complex narrative etched into each of the house’s belongings. There’s a struggling marriage, a writing career on life support, and an angsty teenager in the midst of a heart-twisting self-discovery. These revelations are all made by simply examining objects and listening to Sam’s diaries, and finding things like her interest in Riot Grrrl—a feminist hardcore-punk movement—helped me understand her identity. The Riot Grrrl cassettes and zines aren’t placed in the house just as period artifacts; you can actually the play the cassette tapes littered throughout the house by finding and inserting them into a cassette player.

I wonder if someone who didn’t grow up in the 90s like I did would find the same level of satisfaction in playing Gone Home. Naturally, exploring an empty house has a type of quiet eeriness, and in Gone Home that eeriness is amplified by the simmering storm outside. Rain beats on the windows, thunder explodes in the distance, and a few times I heard a door knob rattle, and was half-expecting somebody to bust in the house and arrest me for the hours of snooping I was entrenched in. But by putting the pieces of the story together yourself, you find that Sam’s cryptic note at the start of the game had nothing to do with kidnapping, murder, or any of its other obvious insinuations. Gone Home is a time warp to the 90s, combined with a realistic, wistful storyline, and that’s what makes it special. But if you take out the time warp element, Gone Home feels like half a game.

Walking through the Greenbriar home was like walking through my own home in the 90s, although that alone isn’t what makes Gone Home emotional. There is a story worth telling, and it’s engrained into the objects found within an ordinary family’s home. Every person has a family with a rich, compelling story, but they almost never get told in the honest and impartial way that Gone Home provides. You find the artifacts. You put the story together. When I went digging around my house as a youngster, my preconceived notions of my family influenced what I found. In Gone Home, that bias is lifted, and digging around becomes an extraordinary experience.

The PC version was purchased by the editor for the purpose of the review. Gone Home is also available on Xbox One and Playstation 4. The previously confirmed Wii-U version has been cancelled.