“All progressions from a higher to a lower order are marked by ruins and mystery and a residue of nameless rage.”

An increasingly common narrative device, particularly in films and novels, is the deliberate obfuscation of plot detail and direct characterization. This can be also observed as a trend in video games, such as in Playdead’s Limbo or Kikiyama’s Yume Nikki—both games which illustrate abstracted, experiential narratives. Heart Machine’s debut, Kickstarted game, Hyper Light Drifter, is part of that camp: a gorgeous, immersive world that’s largely bereft of direct exposition. A hero must wander an ailing kingdom to collect scattered geometries and combat dark forces—nothing in the game’s narrative is more explicit than its premise. Coupled with gameplay likened to a twitch-based Zelda, Hyper Light Drifter is a joy to play; a sombre-hearted action RPG that challenges and rewards in equal measure.

The comparison to Zelda isn’t a dismissive one. Heart Machine’s lead developer, Alex Preston, has made direct comparisons between 1991’s The Legend of Zelda: A Link to the Past and his intentions in developing Hyper Light Drifter. The dialogue-free world of Hyper Light Drifter is meant to evoke the limited storytelling capacities of an NES/SNES era game, and the narrative device works in the game’s advantage. 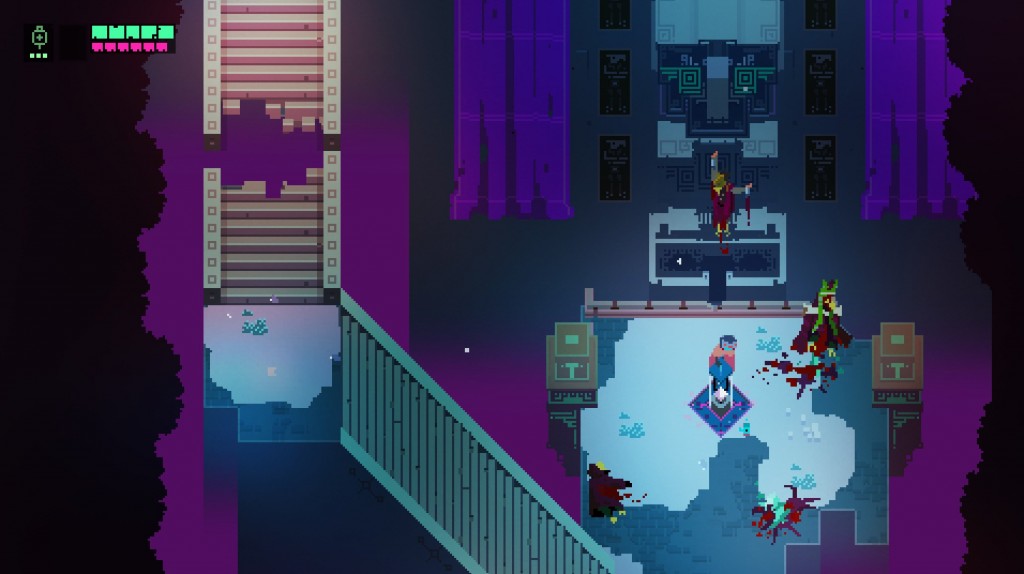 Hyper Light Drifter goes to great lengths to provide a balance between simplicity in concept and depth in execution, and accomplishes much of this through its difficulty. At the beginning, you, as the drifter, have limited combat mechanics—a three-hit combo attack and a directional dash.  Firearms are unlocked later as you progress through the story, but melee combat remains essential, as striking enemies refills ammunition. The drifter has only five hitpoints of health, but has room for three health packs, which can be found (rarely) throughout the environment, and fully refill health upon use. It’s important to manage health, because Hyper Light Drifter punishes careless play.

Shards of currency can also be found hidden around, as well as earned after finishing challenging rooms and bosses. Many of the shards are intricately hidden behind invisible paths and false entrances, along with keys that unlock doors to side content. Four shards can then be assembled into units of currency to pay for unlockable abilities, including a charged sword attack, dashes with different properties, and room to carry more health packs at once.

Hyper Light Drifter is a difficult game that has learned from its contemporaries; elements like boss design draw from Castlevania and Dark Souls, demanding players to demonstrate they have both an intimate grasp of the game’s mechanics, as well as an eye for pattern recognition. Fights are fast-paced and brutal, with little in the way of gimmicks.

When the player inevitably does die, the game resets progress to the exact state of when a room was first entered. Generally, these rooms involve progress from one door to another, and many consist of not much more than a screen. The aforementioned respawn system generally works intuitively, but in some of the game’s puzzle rooms (including one of several, obnoxious, smashing-block obstacle courses) the room can be large, and the checkpoint rendered far less forgiving. Similarly, the health pack system is well-metered, until moments when loose play or poor management leads to frustrating encounters with a thin supply of healing.

The world design of Hyper Light Drifter is supported several-fold by Alex Preston’s acknowledged influences from anime, his own chronic heart-disease, and the atmospheric additions of a soundtrack by American composer Disasterpeace. The world is a rich, ecological post-apocalypse, drawing thematic and visual components from Studio Ghibli’s Nausicaä of the Valley of the Wind, and Gainax’s Neon Genesis Evangelion, while the drifter’s disease and struggles stem from Preston’s own experiences. This is all scored by Disasterpeace’s stunning synth work, which provides a suitably impressive continuation of his work on Fez and David Robert Mitchell’s film It Follows.

To draw an example from another recent film, the presentation of Hyper Light Drifter shares a lot in common with Jonathan Glazer’s 2013 film Under the Skin, based on the novel of the same name. Where Hyper Light Drifter is dialogue-free, Under the Skin utilizes dialogue scantly, and both titles successfully present stark, interpretive stories. As well, both titles illustrate compelling experiences that can be derived from experimentation in narrative; the goals of the respective protagonists are clear, but the circumstances of their plights and backgrounds are shrouded. Hyper Light Drifter could be similarly stylized as a neo-Western. While not directly related to Clint Eastwood’s High Plains Drifter, the spaghetti western trappings are there: a drifter of indeterminate origin arrives in an insular, frontier town to destabilize local power and mete out justice—in this case, dispatching with a compass-rose quartet of anthropomorphic bosses. 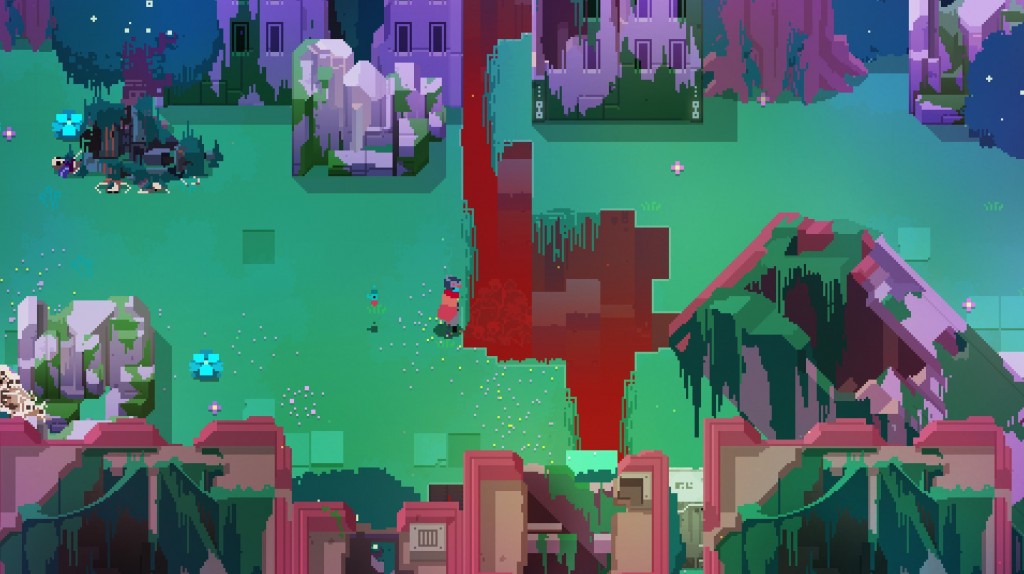 In Hyper Light Drifter, the drifter is beset by some form of illness following a global calamity, and is haunted by a black, slithering presence—a presence inextricably linked to their illness. The only solution, heralded by a ghostly canine guide and a similarly-afflicted knight, seems to be to unite the scattered pieces of a geometric device belonging to a technologically-advanced precursor race. But none of this is verbalized; Hyper Light Drifter’s lore is espoused only through Another World-esque cutscenes, environmental storytelling, and pictographic dialogues with NPCs.

Hyper Light Drifter belongs in the discussion of dichotomy between games and art. Where the artistic elements of the game manage to be silent and interpretive, a game, practically by definition, cannot be interpretive in its rules and operations—at least while conducting itself within any bounds of fairness to its player. Neither can Hyper Light Drifter be truly textless, as the game’s tutorial necessitates button instructions in “press ‘y’ to ping the hud,” et al. Narrative can be interpretive and inferred, but the rules of a game exist to be instructed. Yet this style doesn’t detract from Hyper Light Drifter in the slightest—it’s more so impressive that the game manages to be so bereft of text beyond what’s fundamentally necessary.

Hyper Light Drifter is an unforgiving game, but a beautiful piece of art to experience. It’s a game that can be intimately explored, observed, and listened to, all while engaging in stylish combat and finding a rich sense of discovery. While not distinctly long, Hyper Light Drifter incentivizes exploration and offers replay-ability with some deviously hidden collectables, as well as unlockable costumes and equipment. While its difficulty and vague narrative don’t make it immediately accessible, Hyper Light Drifter never intends to be brazen, instead content to deliver an intimate procession of quiet vistas and ringing sword fights. 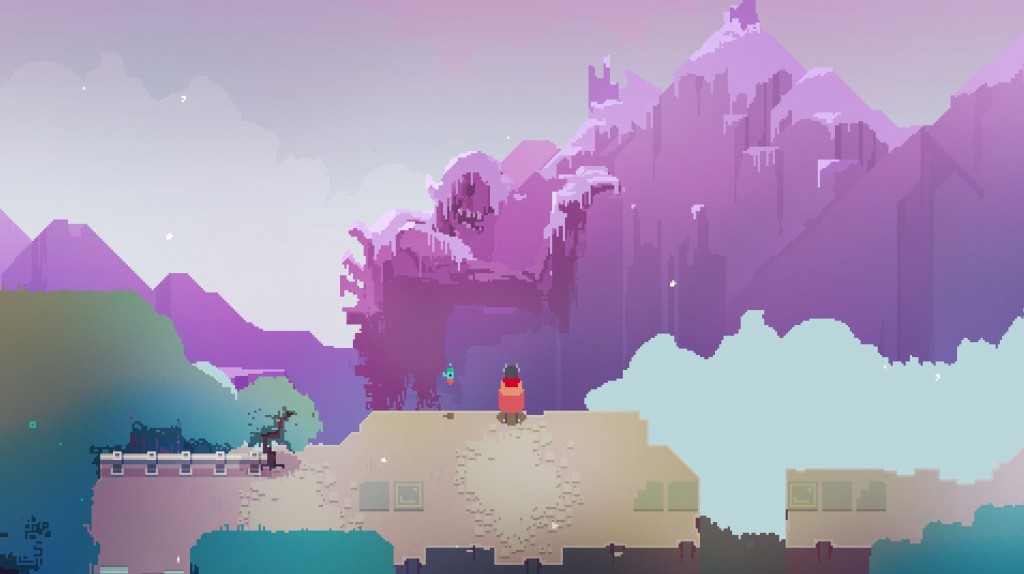 The PC version was supplied to the editor for the purpose of this review. Hyper Light Drifter will also be available on Xbox One and PS4 in the summer.