Kisima innitchuna. Never alone. I have no idea if that’s an exact translation or a rough one, but that’s what Never Alone teaches me in its title screen. The game first intrigued me when it was announced as a narrative-driven adventure infused with the culture of the Iñupiat people, better known as Alaskan natives. The idea that games can do with culture and history what they do with logic and imagination is important as video games become more respected.

Never Alone is inspired by a traditional Iñupiat story, Kunuuksaayuka, about a boy, Nuna, who seeks the origin of a blizzard. But developer Upper One Games took the creative liberty to change the lead to a young female character (still named Nuna), saying they wanted to create a role model for girls. The project was overseen by cultural ambassadors as well as the surviving daughter of Kunuuksaayuka author Robert “Nasruk” Cleveland, and translated excerpts from his original story are on the game’s loading screens. Also interspersed throughout the game are unlockable, documentary- style interviews (called “Cultural Insights”) which share information and anecdotes about the various cultural aspects seen throughout the game.

Within the first minute of the game, you’re presented with over five minutes of these interviews. You’re not forced to watch them, but they are imperative to understanding the subtext of the game’s world. Really, it’s not the game that teaches you about the culture—the game’s mostly a supplement to the educational interviews; walk or jump for a minute, then watch two minutes of videos. They’re well- polished and worth the watch, but it felt like Upper One was trying to hit a checklist of cultural elements with no regard to pacing.

Unfortunately, the care put into the cinematography does not carry into the gameplay—the puzzle-platforming is rudimentary; new mechanics, while interesting, come few and far between; existing mechanics are employed repetitively; and the game features technical issues that feel amateurish in comparison. The game is clearly targeted at a younger, more curious audience, but I can’t see young players being any less frustrated with these hiccups than I was. 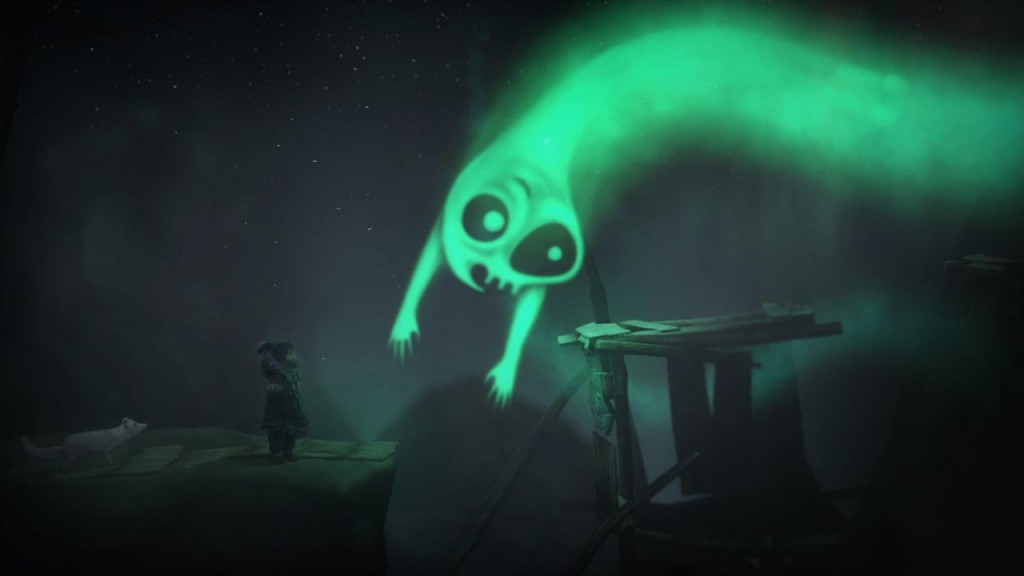 Early into your adventure you meet a friendly white fox, controlled either by AI or a local co-operative partner. In co-op, players take turns relying on each other. Nuna will wait for the fox to climb somewhere, or the fox will wait for Nuna to hit something with her bola. Reliance works well in theory to build on the motif of selflessness, but it doesn’t lend itself to good co-op gameplay when one player is just standing around. In solo, you’ll need to switch between characters manually and fight the controls to quickly get your character into the right position. Never Alone feels built for single-player or for co-op, but never both.

One of the game’s final Cultural Insights describes the importance of “observing the weather” in Iñupiat culture, and I realized then that, during my entire playthrough, I had been conditioned to observe the weather, and to pay attention to the wind patterns to help time jumps. Never Alone had successfully taught me culture through mechanic—but just once. I recognized the missed potential; one Cultural Insight discussed how the Iñupiat could find each other in the dark by the air of their breath. Imagine that as a gameplay mechanic.

Never Alone is best described as a rough translation of culture into gameplay; in using a videogame as a vessel (instead of a tool) to teach, Never Alone succeeds— the information is all there in abundance; you’ll just be sitting through it.

This review was originally published in the Navigator Newspaper on September 10, 2015.

The Xbox One version was purchased by the editor for the purpose of the review. Never Alone is also available on PC , PS4, and Wii U.