Oxenfree Review: All the blocks in free

On Google, the word “blocking” is defined in a few different ways. As a noun, it is “the action or process of obstructing movement, progress, or activity,” as in a “failure to recall or consider an unpleasant memory or train of thought.” As a verb, it is to “design or plan the movements of actors on a stage or movie set.” Oxenfree, the inaugural title from Night School Studio—a team of talents formally of Pixar and Telltale Games—is best considered with the word blocking in mind.

Oxenfree opens on a small boat, where it introduces you to the first of its equally small cast of only five characters. You are Alex, a high school senior who’s on her way to a beach party on a deserted island with some old school chums and (reluctantly) her new step-brother. Your old friend Ren promises the night will be one to remember—so long as you’ve brought your radio which he assures will pick up on some unusual transmissions later in the night. Things go quickly awry once Alex taps into the transmissions, but the game never devolves into straight horror. Oxenfree maintains an eerie adventure through the lens of teenagers wrapped up in the drama of finding themselves amidst a disturbing (albeit fun) paranormal mystery.

The majority of your time with Oxenfree will be spent engaging in dialogue; as you roam the island, one of your acquaintances will begin a conversation and you’ll be able to both converse and wander the area simultaneously. Oxenfree never forces you to be a talking statue, instead always giving you a way to direct the scene and block your character. In a campfire scene, for instance, you can grab a beer, throw some rocks in the ocean, poke the fire, all while continuing the conversation. You can even walk away, and the characters will remark on you leaving before continuing what they were saying in a natural segue. 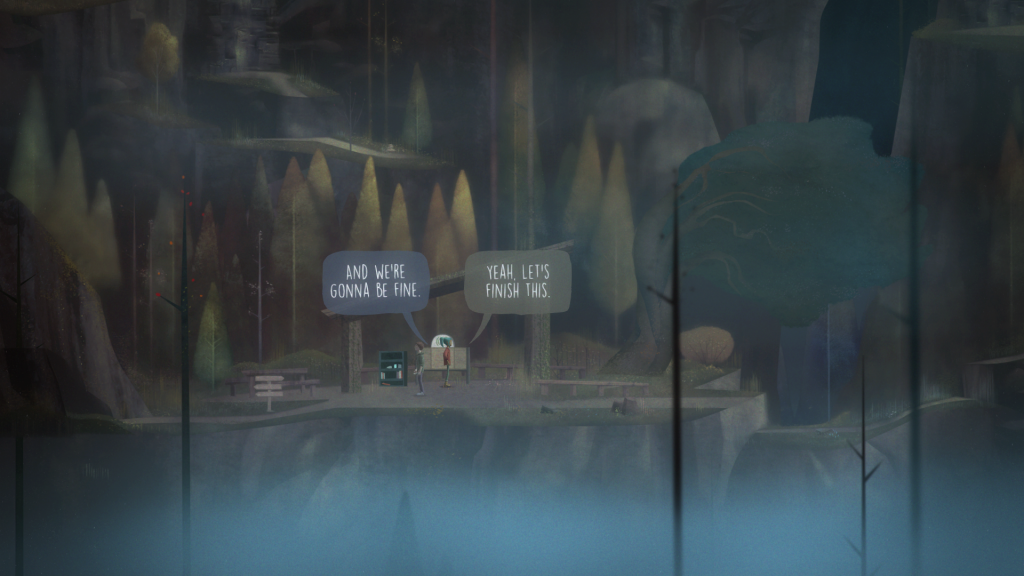 As in the Telltale adventure games that inspired it, your character in Oxenfree is more an extension of you and your perception of the character’s role than as a traditional player insert. Each dialogue in Oxenfree offers you a brief time to choose from a selection of paraphrased responses—a dialogue tree—each with varying subtextual attitudes. The response you choose is then elaborated by Alex to form a naturally flowing dialogue that develops her character in the tone you choose. She can be shy or spunky or a sarcastic badass, and she can open up about her family or friends or her personal grief over the death of brother, all depending on which options you choose. Alternatively, you can block it all out and choose not to respond at all.

The system isn’t perfect however, sometimes Oxenfree will buffer your dialogue selection to come during a natural lull in conversation, but sometimes it will blatantly interrupt what another character was saying. Most of the time, the dialogues are so long and the areas so sparse that you can reach the end of a level before a conversation is even finished. Then you have to either interrupt the dialogue to continue the game, or pace around for a while until it finally ends.

The alterations Night School has made to the dialogue wheel incur a minimalistic design philosophy. There is almost no visual interface beyond the occasional, subtle queues to interact, or to speak (emblazoned in speech bubbles), or to change the station on your radio via a holographic dial. The only other queue is one at the heart of Oxenfree’s emotional salience: A notification that a character is thinking about another via a small thought bubble.

If you worry or upset one of your friends in Oxenfree, a brief indicator will appear above their head with the face of the character they’re thinking about. The feature offers nothing more than the knowledge to you that Oxenfree’s characters are, in some ways, alive. And that’s one of the game’s greatest achievements; by the end of Oxenfree, I was able to read the subtext of Alex’s dialogue simply because I knew her so well as the character I shaped. 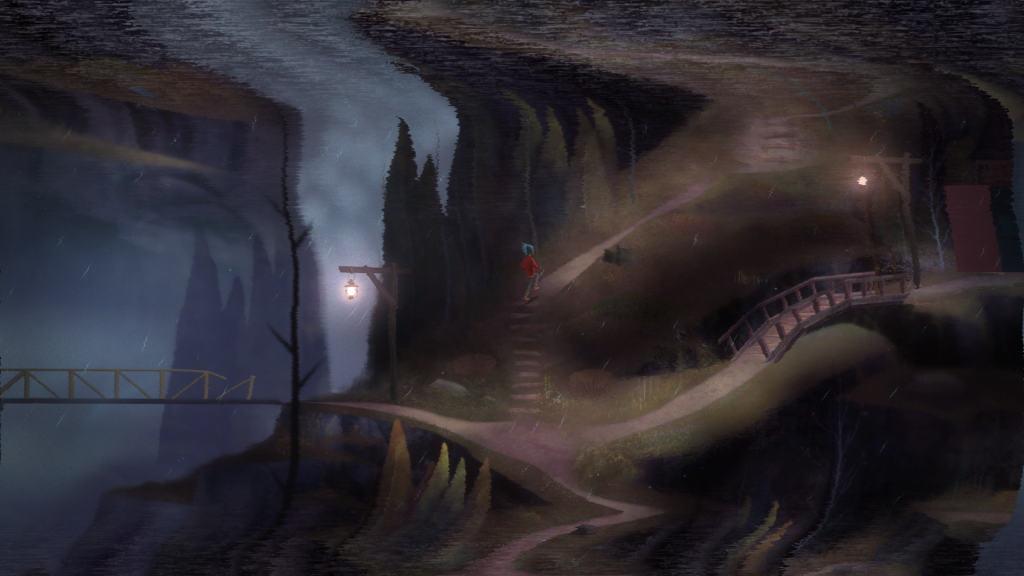 The result is theatrical if not cinematic—Oxenfree feels distanced by its omniscient wide-angle camera, and it creates the sense of controlling a stage play. The art of the island and its backgrounds is a painted and almost saturated watercolour style, evoking a theatre backdrop with its layers and odd, 2D geometry, while the characters stand out as 3D models walking across a stage. There’s an attention to aural design as well; audio queues indicate unlocks, nearby secrets, and puzzle solutions, while the game’s remarkable, voice-acted dialogue is the forefront to the story and mechanics. A rich soundtrack of synth and distortion by Scntfc (recalling the best of his work with Jim Guthrie) scores the many turns of emotion and dramatic tone in the game.

Oxenfree is like a playable podcast serial; it’s like an audio drama that was put to stage and subsequently converted to a videogame—and the narrative would succeed regardless of its medium. What makes it work best as a game, however, is its dedication to player agency. Its dialogue options are large-scale in terms of character development, and player involvement and investment is imperative to solving certain puzzles and reaching one of the game’s widely varying outcomes. Alex is not a formulaic character, but a formative one. And Oxenfree is not just an adventure game, but the advent of a new style of interactive fiction.

The Xbox One version was purchased by the editor for the purpose of the review. Oxenfree is also available on PC, and will arrive on PS4 later this year.