Coping with kittens in Neko Atsume

When I was in elementary school, my best friend and I would sit next to each other on the bench after classes and play with our brightly colored Tamagotchis. To this day, I still don’t really understand why we voluntarily funneled so many hours of our lives into these little plastic key chains. Maybe it was a sense of fulfillment, or maybe it was because we simply had nothing else better to do. Today, with my Tamagotchi collecting dust somewhere in the recesses of my childhood bedroom, I’ve taken a penchant to funneling hours of my adult life into the modern equivalent: Neko Atsume: Kitty Collector.

After seeing posts and memes online about this adorable smartphone game, I mused about downloading it and seeing what all the fuss was about. I thought I would get it and forget about it like I had eventually done with my Tamagotchi, but I found I couldn’t stand to abandon the cuteness of Neko Atsume.

The perfect combination of simple gameplay and a cartoon-like art style, Neko Atsume feels similar to a Tamagotchi at its most basic level. Food, furniture, and cat toys are used to attract a smorgasbord of different cats to your yard depending on their personalities. You can also use the in-game camera to take photos to collect in each cat’s respective photo album. Since there are such a variety of cat toys, it’s always a delight to find out which cat is gently nestled in a blanket or batting mischievously at a feather. 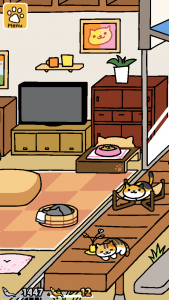 New players start out with just a backyard—room enough for a small number of cats—but you can upgrade to a larger yard and living room space after collecting enough fish from the cats. Because the cats are so goddamn cute, the incentive lies in composing an attractive enough yard for maximum cat exposure. In a way, there really isn’t a “point” in playing Neko Atsume other than seeing how many cute cats show up in your yard.

Ironically enough, a large part of the game relies on not playing the game. Since the cats only appear when you leave the application alone, there is only so much twiddling and tweaking you can do before there’s nothing left but to set the game aside and wait. That’s what makes Neko Atsume a great game to check while waiting in line or riding public transit.

I’ve started using Neko Atsume as an icebreaker with my friends to see where they lie on the crazy scale. Some think it’s an absolute, complete waste of time, rolling their eyes and scoffing whenever I pull out my phone to play. Then there are my other friends who happily indulge in the madness by sharing screenshots of their own cat-filled yards.

To my friends who have questioned my sanity and wondered what’s the point of putting out digital food and toys for digital cats, I only have one reply: I don’t have a problem—I can stop whenever I’d like!

A big part of Neko Atsume is strategizing the kinds of toys or food you put out in your yard, and then saving up enough fish for more luxurious items. Each time I open the application, I go through the motions of scrolling through the list of cats that left me fish, refilling food, taking photos of cats in the yard, and budgeting what new item I’ll buy next. Depending on how much fish the previous day’s cats left, I use that to finance more expensive cat toys to attract even rarer cats for my collection.

While there are 32 normal cats that come and go as they please, there are 17 specialty cats that only show up when a certain item is left out. My favorite rare cat, Tubbs, makes an appearance only when there is more expensive food, such as Frisky Bitz or Sashimi. Tubbs gobbles up entire servings of food, lounges next to the empty dishes with a smug look on its face, and loafs around before disappearing without a trace. Me too, Tubbs. Me too. 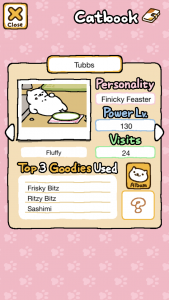 But perhaps one of the most amusing game mechanics is renaming the cats, a system I’ve completely abused by naming every cat after a close friend, with or without their consent. I always get a kick out of seeing which one of my friends visited me that day, and seeing how many fish they brought me. Depending on how frequently a cat visits the yard, each will eventually bring a “memento” that represents its personality. Much like real-life cats, they bring little knickknacks such as buttons, a mitten, or a dead bug. Whenever something particularly cute like that happens, I’ll take a screenshot and send it to that friend with a report about what their cat did that day. Come to think of it, perhaps I am showing signs of “Early-onset Crazy Cat Lady.”

I didn’t realize how bad my addiction to the game was until I caught myself in a dark, crowded nightclub, leaning against a column and “looking at my texts.” In reality, I was checking the little digital cats that wandered on and off my screen while loud music bumped in the background.

It’s been three months since I downloaded Neko Atsume, but I can see the light at the end of the tunnel. My dependency on this game has decreased exponentially since I’ve “finished” the game—there is significantly less to do once all the items have been purchased.

I still enjoy checking the game and smiling to myself on the metro when a cat named after my best friend leaves me a particularly generous amount of fish that day. However, I’ve broken the embarrassing habit of showing sweaty people on the dance floor my collection of imaginary cats. Perhaps it’s time to dig up my old Tamagotchi again.